Little and often - the thought behind Spaced Repetition 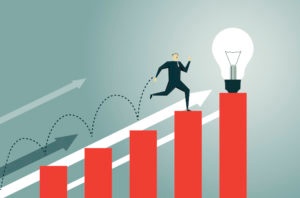 Many people think that the teaching technique known as Spaced Repetition, which has gained more and more traction over recent years with language learning apps was developed quite recently.

However, Spaced Repetition can trace its roots all the way back to 1885, when German psychologist, and prominent thinker around memory and recall, Hermann Ebbinghaus, published an experimental study about memory called Memory: A Contribution to Experimental Psychology. The central element of this work was the forgetting curve, which refers to the decline of us being able to remember pieces of information over time, when there is no attempt to retain them.

The two things we are most interested in when it comes to learning, are retention and recall. But we should think differently of how to improve our powers in that regard. How to absorb, retain and recall better. Simply put, how to learn better. In order to drill new information or knowledge into our brain, we don’t need to cram for hours on end the night before a test or listen intently to a daylong training course. As a matter of fact, these approaches to learning will probably have the opposite effect. Along with the tedious and repetitive nature of reading a textbook or listening to a classroom teacher, traditional techniques used for learning are extremely ineffective too. Such techniques are misaligned with how our brains actually absorb new information or knowledge and do not help with retention or recollection. We drift, we lose interest, become distracted, particularly in this ever changing world with extra demands on our time and concentration. Studies into the subject actually suggest that with techniques such as Spaced Repetition, we are much more likely to embed new information or knowledge into our long-term memory.

Despite its immense capabilities, the brain still requires time to absorb learning materials, process this information, consolidate everything you have consumed, and build neural pathways to other related concepts. But through Spaced Repetition, the brain is given the time it needs to embed information or knowledge deep within your long-term memory.

According to Ebbinghaus, the hypothesis of the forgetting curve states that 90 per cent of information or knowledge learned will be forgotten within three days. Every time we recall or review learning materials, we will forget less and less over time. This means the forgetting curve is exponential and supports transience, one of the seven kinds of memory failures. However, Spaced Repetition attempts to mitigate the effects of the forgetting curve by increasing the intervals of time between subsequent reviews of previously learned material. 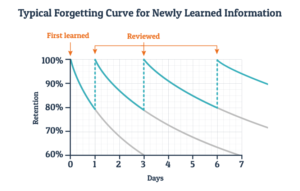 As opposed to the popular held thought at the time, Ebbinghaus wanted to show that higher mental processes could be studied through experimentation. He wanted to use simple acoustic encoding and maintenance rehearsal to control potentially confounding variables.

However, Ebbinghaus needed a list of words that could be easily memorised but which had no prior cognitive associations, as this would affect his results. Therefore, he used items that would later be called “nonsense syllables,” which are consonant-vowel-consonant combinations (also known as the CVC trigram) where the consonant does not repeat and the syllable does not have prior meaning.

After eliminating those with meaning, he had 2,300 syllables to choose from and memorise. He would pull random syllables out of a box, write them down in a notebook, read out the syllables, and attempt to recall them at the end of the procedure to the sound of a metronome and with the same voice inflection.

Even though Ebbinghaus tried to eliminate meaning with his experiments, it was later determined that humans impose meaning even on nonsense syllables. For instance, the nonsense syllable PED (the first three letters of several common words) is actually less nonsensical than a syllable such as KOJ and others that differ in association value.

So, although there are limitations to his work, primarily because he was the only subject to be tested, Ebbinghaus’ research about memory was groundbreaking, with findings that are still relevant and supported to this day. Arguably his most famous finding was the forgetting curve.

The forgetting curve shows how information or knowledge stored within the brain is lost over time if the individual makes no attempt to retain it. A related concept is the strength of memory, which refers to the durability that memory traces in the brain; the stronger the memory, the longer a person call recall it for.

With newly acquired information or knowledge, the curve shows that humans tend to halve their memory in a matter of days or weeks unless they consciously review the learned material. The speed of forgetting depends on a number of factors too, such as the difficulty of learned material, how meaningful it is, its representation, and physiological factors like stress and sleep.

So, Ebbinghaus showed us the forgetting curve, but the power lies in what ways we can find to overcome it. While some aspects that contribute to the speed of forgetting cannot be changed, Ebbinghaus said basic training in mnemonic techniques could help overcome differences in performance. He asserted that the best methods for increasing memory strength were:

Better memory representation (e.g. mnemonic techniques) – Coming up with a song is perhaps the most commonly used mnemonic technique. An obvious example of this is how children remember their ABCs. However, other types include names, expressions, models, odes, note organisation, images, connections, and spellings.

Repetition based on active recall (especially Spaced Repetition) – When reviewing learned information, spacing out sessions over time makes items easier to remember. This is achieved through spaced presentation rather than repeat studying in a short span of time, also known as massed presentation.

Ebbinghaus believed that each repetition in learning increases the optimum interval before the next repetition is needed and for near-perfect retention, initial repetitions may need to be made within days. However, later research suggested that higher original learning could also produce slower forgetting.

What’s more, some memories remain free from the effects of interference and don’t always follow the typical forgetting curve. For this reason, there is debate among supporters of Ebbinghaus about the shape of the curve for events and facts significant to the subject.

For instance, memories of shocking events like the Kennedy Assassination or 9/11 are vividly imprinted in memory, while considerable variations in written recollections are possible when memory incorporates after-acquired information.

We know that when it comes to purposefully learning information or acquiring new knowledge, Ebbinghaus and his forgetting curve theory promote positive outcomes through better memory representation and repetition based on active recall.