Project Griffin: What benefits could e-learning bring to emergency training? 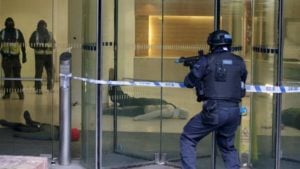 Plans have been announced for an extra one million workers based in crowded city centre areas, and sports and entertainment venues to receive training in how to effectively react and respond in the event of a terrorist attack.

Project Griffin, a scheme jointly designed and developed by the City Of London and Metropolitan Police forces is to be extended from the 100,000 military and emergency service staff who already receive training predominantly in the capital. Historically, such instruction has been primarily classroom based, and delivered to small groups at centres such as The Cabinet Office's Emergency Planning College in Easingwold, North Yorkshire. Across so many emergency service staff, this process, clearly, can take years. The difficulty of the times demands a new, fresher approach, more appropriate, more accessible, and faster.

The training Project Griffin requires is structured in such a way that individuals who complete levels are subsequently equipped to train their colleagues. Project Griffin is now also pursuing involvement from those working in the retail, hospitality, entertainment and travel sectors to help ripple out the training. The Association of British Travel Agents is just one organisation to have signed up to be involved in the expansion, in the light of the recent 'soft' target attacks in Belgium and France, attacks against civilians rather than military or other governmental staff.

Announcing the expansion recently, at the Security and Counter Terrorism Expo, Detective Superintendent Scott Wilson said: "We need everyone to play a part in keeping the public alert, not alarmed. Police can help explain what the threats and risks to different sectors are, but companies are better placed to explain to staff exactly what action they can take to enhance their security and how to respond if the worst happens”

Individual organisations, businesses and companies, it is thought, will already have their own emergency procedures and plans in place, and important protective security information, equipment and vitally, local knowledge that could help keep staff and the public safe. However, an expansion of this scale would require a more focussed, united, and standardised set of guidelines in order for a more comprehensive reaction to be provided in the case of emergency.

With such a large number of learners already involved in Project Griffin, and the announcement of this expansion, it would seem only natural to consider the potential of e-learning in the delivery of the training. As the terror threat changes from day to day, week to week, learners will require access to this ever changing information feed. This is a 'live' and ongoing situation, constantly evolving, and ever developing. In terms of delivering these most important of messages, at the right time, in a fully accessible way, it could be argued that e-learning offers the best solution. But how? What benefits would e-learning bring to the table?

The benefits of e-learning, and its use in this context, are multifarious. Firstly, information is passed to users at the same time. Any changes that need to be put into place in response to specific intelligence of a particular threat, can be passed across and down the chain in a shorter time. As well as this, e-learning allows users to update their knowledge at all times, repeatedly, and research tells us that repetition is key to enabling learners to gain full understanding of the issues. E-learning also gives trainers, in this case key emergency responders, full analytical feedback, providing the opportunity to make the ongoing and changing design structure and nature of Project Griffin's training more flexible and responsive. Speed, cost, and ease of access are all important.

Faster delivery – In a scenario where change of instruction is faster than ever, such as in the case of public sector bodies rolling out vital safety training to private sector employees, a key advantage of e-learning is that it has quicker delivery cycle times than traditional classroom-based instruction.

Lower cost - Because of the speed of delivery of e-learning, the costs of learning and development is drastically reduced, in the case of Project Griffin both for public sector bodies, and private sector employers seeking involvement in this crucial training.

Ease of access – E-learning instruction delivered via smartphone, tablet or desktop is simple for users to access, and can be done in their own time, and at their own pace. Users are more prepared, more able, to engage with the instruction, and more able to learn through its repeated use.

The proposed expansion in the provision of instruction delivered by Project Griffin can only be improved with the increased use of technology, and the adoption of faster, cheaper and more accessible methods. Response and reaction are central to how we handle emergency situations, giving greater importance to training. and in this case, the benefits of e-learning are clear.