The millennial question: Whose tech is it anyway? 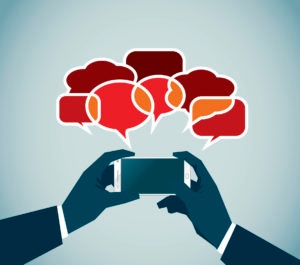 Sinek is a renowned motivational speaker, marketing consultant, and the author of several books. He has worked with organisations as diverse as Disney, Microsoft, Costco, Ernst & Young, Pfizer, and the US Military, as well as sharing his ideas in talks at the United Nations, the United States Congress, and many governmental bodies in the US and around the world. His talk, How Great Leaders Inspire Action is listed as the third most popular TED presentation of all time. He is known for his casual and relaxed style of delivery, as well as his unswerving and determined optimism. Sinek is, by his own admission, an idealist, and looks at the world of work as such, focussing on the worth of interpersonal relationships, and the potential for growth in every individual. His understanding of leadership is informed by the the influence of psychology and biology on the human condition. For many, it is this which gives his work, his writing, such a sense of currency and helps make it both accessible and relatable.

The video, which picked up much traction on social media over the Christmas period, looked at the issues faced by leaders in connecting and engaging with a growing workforce of Millennials. Defining millennialas those born after 1984, Sinek looks firstly at what it means to be a member of this demographic, what is important to them, and what themes most effect their development collectively, as individuals, and as society’s future. He makes assertions we’re familiar with, highlights issues that affect the development Millennials both in work, and in their personal lives. And he raises valid questions. But maybe, in some of this, he’s a little wide of the mark. Maybe there are alternative answers to the questions he asks?

In the video, Sinek’s contention is that several key factors in both their upbringing, and the world they’ve grown up into have led to them having low self esteem, feeling disengaged in the workplace, and unable to build meaningful relationships with their peers or the world around them. His view here, is that technology and their reliance on it, has become problematic due to its addictive nature, and is inhibiting the growth of this generation as individuals, as well as falsely and negatively clouding their view of the world.

The starting point for Sinek’s train of thought in the clip, is that the generation he’s speaking of have been dealt a bad hand. Through no fault of their own. They’ve been brought up with a sense of entitlement. All their life they’ve been told they could have whatever they wanted, be whatever they wanted, and achieve whatever they wanted. Those of us who have parented millennials must surely put our hands up to this. He’s right. Guilty, as charged, your honour! It may have been with all the best and most positive intention, but, according to Sinek, it’s fed into and encouraged these feelings of entitlement which, at the end of the day, bear little or no reality to life in the outside world, the world of work.

The frustration our millennial friends feel at this has led them to feelings of impatience. Raised in a world of instant gratification, a world where everything they could possibly need or wish for waits at the touch of a button, everything is there for them. A world at the end of their fingers. From pizza to dating and all points in between, it can all be accessed quickly and easily. When they eventually reach the workplace, they realise the difference, the cold, uncomfortable truth that the world doesn’t exactly work in that way. Sinek talks of their impatience, their singular focus on the summit of the mountain, rather than their understanding of the fact that they must complete the journey up the mountain to actually get to that summit.

According to Sinek’s thinking in this video, one of the main problems millennials face in the workplace is their over-reliance on technology, and the addiction that over reliance brings, particularly with regard to the use of social media. With every like, with each share, retweet, and every follow, comes a hit of Dopamine, the human body’s own naturally produced feel good drug. Its Dopamine that makes us feel good when we laugh, when we drink, or smoke, or gamble. And its a release of that substance that hits, every time someone gives us their ‘approval’ on social media. Sinek’s point is that millennials are made emotionally vulnerable through their addiction to the Dopamine rush brought about by this approval, and the recommendation of others that they feel compelled to seek.

In many ways, we’re all guilty of this. We’ve become so reliant on our phones simply because they do so much, they offer so many benefits, so many different features to make our lives easier. When asked at a meeting, or a conference, to switch off, how many of us just set them to silent? We’ve become so worried that we’ll miss something, a call, a message, an email. Of course, its ridiculous when we think about it. Many of us got through whole decades without this technology, yet its become such a part of us, of our daily life, we’ve become programmed to react and interact with it on a minute by minute basis. We know all of this. But it makes very little difference. If we don’t receive a notification for a few minutes, we wonder why, so we check the screen. We carry on regardless, placing our smartphone next to our plate when we’re out for dinner. Knife, fork, salt, pepper, phone…. right?

So, we get the point. We understand his point about our reliance, our dependence on tech. And there’s an unspoken agreement that we’ll just carry on behaving as we do.

There’s always a but. Maybe there's another way of looking at this. Simon Sinek is in his mid forties. He remembers a world before the internet, his parents never owned a mobile phone, there was no computer in the family home. He grew up and went to school before the internet was so universally accessible. Many of us remember that same world. A world where the only handheld communications device we were aware of belonged to Captain Kirk on Star Trek! Somehow, we managed to scrape through those dark pre-internet days, we grew up, and we had children. We gave the world the Millennials that Simon Sinek speaks of.

Obviously, this generation have grown with the technology. Its how they communicate, how they entertain themselves. They use it in work and play, and they’re able, more able than any generation, in fact, to reap the rich benefits of the world that surrounds them, thanks to that technology. It has informed and influenced their lives since the day they were born, and it always will. Actually, further to that, its influence is still very much growing. We are already seeing the next generation of technological development in VR, AR, and wearable tech.

So surely it would make far more sense for leaders and organisations to embrace this fact, to embrace and welcome the technology as it develops. As millennials have entered the workplace over the past few years, they’ve brought with them their understanding and appreciation of the power of the tech. They not only understand it, they expect it. Their relationship with technology is fundamental rather than supplementary. They want to work in an environment that, like them, relies on technology. A working environment that provides the answers they need via that technology, and that makes it accessible and relatable to them and their lives.

By embracing technology, recognising its importance to the new working generation, and harnessing its many benefits in areas such as Learning and Development, organisations are able to provide training solutions which are more easily accessed, more engaging with their audience, and with direct, measurable results.

Users of Wranx only need to engage with the platform for just a few minutes each day, leaving plenty of time for them to put the phone down for long enough to focus on building lasting, meaningful, and worthwhile human relationships!

And we feel sure that Simon Sinek would approve!