How many times have you sat with friends at a barbecue, relaxing in the sun with a cold drink, enjoying each other’s company when the inevitable happens…and someone asks…

Who's your favourite educational psychologist?

Happens all the time, right? It’s a hot topic for any event, and bound to get conversation going, right? Right? No?

Okay, ….. so maybe it’s not one of your go to conversations but it’s certainly worth talking about. The work of so many different psychologists influences thought on how we live, behave and learn, and, because of that, there can be no single winner.

There are many who’ve studied the subject over centuries, whose work is still as valid today as it was then. This is work which still influences and inspires those with a focus on learning and development and the growth of knowledge.

At Wranx, we’re big fans of the work of German psychologist Hermann Ebbinghaus in the 19th Century. We’d have to put him at number one. Through his pioneering work into memory and recall, he developed the idea of the forgetting curve, and gave us an understanding of the power of Spaced Repetition in learning. Learning in small chunks, repeated over time provides the basis of Wranx, and one of the reasons it works so well. Though he’s definitely our favourite, it’s not all about ol’ Hermann.

We all learn and grow at different speeds and in different ways. There are many theories to explain the psychology behind our learning and development, each adding to our understanding of the human mind.

In the past, we’ve discussed the work of Albert Bandura around social (or observational) learning. We’re all learning socially all of the time, was Bandura’s point. We observe the world around us, and alter our behaviour as a consequence. These theories put us at the centre of our own learning, but with the collaboration, co-operation and support of others. 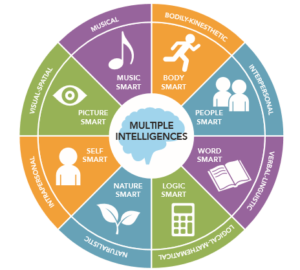 More recently, the American developmental psychologist Howard Gardner developed a Theory Of Multiple Intelligences. In this theory, he argues that humans have several ways of processing information, all independent of one another. Since the late 1990s, he has identified eight intelligences: linguistic, logic-mathematical, musical, spatial, bodily/kinesthetic, interpersonal, intrapersonal, and naturalistic. The central idea that intelligence can be separated into these disciplines rather than being quantified as a whole, has picked up much attention since Gardner first started developing his theory in the early 80s.

John Dewey was an American psychologist, philosopher and educational reformer. Driven by a passion for democracy in education, his theories and ideas have influenced educational and social reform. Dewey is considered to be one of the founding fathers of functional psychology; a theory based on pragmatism. He believed that a passion for continual learning is as important for the teacher as it is to the student. The teacher’s ability to develop their teaching according to the mental function of the individual student is, Dewey believed, the most important skill a teacher can have.

Richard E. Mayer’s research into cognition, learning and problem solving led him to develop multimedia learning theory. This theory suggests that learning is best when presented simultaneously, both verbally and visually, and is one of the central educational forces behind e-learning.

Through the work of these key thinkers and others, we are able to better understand the function of the brain and human behaviour. Their work gives Learning and Development providers a window into the world of the human psyche. As we learn how to learn, we learn how to grow, and thanks to the invaluable work of educational psychologists such as these, we are able to incorporate our learning into our lives and vice versa.

As John Dewey once said “Education is not preparation for life; education is life itself.”